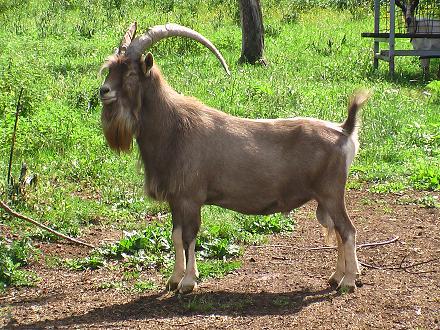 My name is Marco and I am the 604th tribute buck from the year 2007. Since July 21, 2009, I have been grazing O. Wittmer's green areas. Among other things, I support the maintenance of the steep slopes of the Hardenburg and some areas of the community in Deidesheim and the surrounding area.

Maybe we'll meet on one of your hikes through the Palatinate.

My name is Karl-Heinz and I am the 608th tribute buck from 2011. Since September 2011, I came to Marco's accommodation to support him in the Forst district on the Wine Route.

On the Tuesday after Pentecost, a billy goat must be handed over by the youngest Lambrecht bridal couple at sunrise at the Deidesheim forest line. Then it will be auctioned off. It is an old custom. This year Cathrin Konrad and Daniel Schulte have the honor. Together with Mayor Michael Stöhr, the bridal couple and the billy goat were presented to media representatives.

Billy goat Daniel will be auctioned in Deidesheim on the Tuesday after Pentecost.

29-year-old Cathrin Konrad comes from Lambrecht. She met her fiancé, who was the same age, 10 years ago while studying landscape architecture in Höxter. Daniel Schulte comes from Lippstadt in East Westphalia. Both work in a planning office in Kaiserslautern.

Daniel Schulte has lived in the Palatinate since 2008. The desire to lead the Billy Goat came from him. Cathrin Konrad didn't want to at first, but she said she was persuaded by the registrar.

The billy goat, whose name was 'Daniel' when he was handed over, is currently called 'Helmut'. Although 'hear' is not the appropriate expression. At the press conference he behaved extremely lively and at times could only be tamed with a lot of patience. Mayor Michael Stöhr said the animal was a magnificent and spirited buck. This could be seen in the goat.

Helmut was born in 2007. His father is the buck 'Marco', well-known in the Palatinate, who was auctioned in Deidesheim in 2007 and was retired by Oliver Wittmer in the Forst district. Oliver Wittmer from Deidesheim has about 80 animals and Bock Helmut was bred by him. The 6-year-old animal weighs between 80 and 100 kg and has a horn span of around 80 cm. Helmut already has offspring. He is the proud father of 2 'sons'.

This year the Billy Goat will be led from Lambrecht to Deidesheim for the 611th time. Michael Stöhr, who has been the 'mayor' for the 20th time during his term of office, is looking forward to the upcoming task together with the future bridal couple.