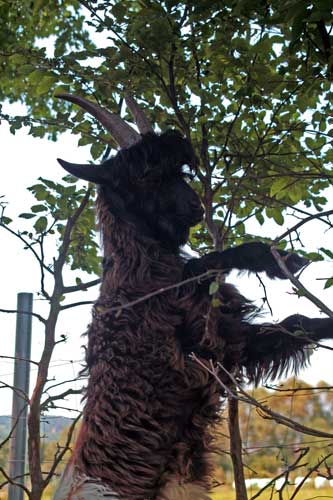 The breed from Switzerland, also known as 'glacier goat', is considered to be one of the oldest thoroughbred goat breeds. More than 1000 years ago, it was introduced in Lower Valais and later also kept in Upper Valais. On the verge of disappearing, the number of herd book animals has been increasing again for the last 80 years and has now stabilized. Nevertheless, it is still one of the internationally endangered breeds.
In 2004, its herd book stock was around 2000 animals.

The goats are horned, both male and female. The horns of the bucks are very pronounced.
The Valais have long fur, the front half of the animal is black and the rear half is white. They often have long forehead hair that covers their eyes and a black beard.
The magnificent coat of hair protects the Valais from heat and cold and must not be cut.

We use our Valais very successfully in landscaping, as they are excellently suited for steep and lean slopes up to rocky slopes.
The breed is very undemanding and, last but not least, very robust due to its long coat.

The goat is fully grown when it is about 4 years old.

During the mating season there is a tolerance reflex. Often the head of the buck is rubbed against the body of the female, but the goats also rub against the buck. Another feature is the buck's loud 'snout'. The buck keeps opening his lips when he snouts this way.
If there are several bucks, there are fights for rank at this time. If the goat is not mated, heat will recur every 17 to 23 days.

The goat has a gestation period of 5 months, i.e. 145 - 156 days and gives birth to one or two kids. The Valais give birth to their fawns without any obstetrics. If there is too much crowding in the stall, various mothers will move to a sheltered place in the enclosure to lame. After 3 days, these mothers come back to the herd with their young.
There are always color errors at birth, we do not take these animals into our breeding, but sell them to goat friends.